One of the best restaurants in Atlanta! Definitely the best barbecue in Atlanta
Review for SkyLounge Atlanta by Nicholas
Rating:

Six Flags is definitely the best amusement park in Atlanta! There aren't many amusement parks in Atlanta but this one is so much fun! Definitely one of the best things ..
Review for The Varsity by Steve
Rating:

Yes, an Atlanta institution! OK, these are not gourmet hot dogs, burgers and fries, but it is a dining experience and it's good grub fast. Highly recommend ..
Review for Park Tavern in Piedmont Park by Nicholas
Rating: 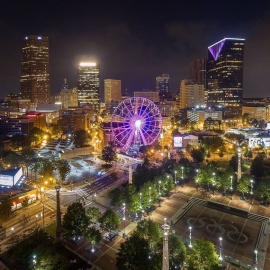 Hotels & Things to Do in Atlanta

Hole In the Wall

Ther is something for every in Atlanta night or day. This is a very diverse city there are museums, theaters and historic landmarks to entertain you year round. Get an Atlanta CityPass it's your ticket to eight top attractions; Georgia Aquarium, World of Coca-Cola, Zoo Atlanta, Fernbank Museum of Natural History, Atlanta Botanical Garden, High Museum of Art, Atlanta History Center. Or just take a trip to the new Gwinnet Stadium home of the Braves. Maybe you want to dig for gold in Villa Rica, Georgia. Are you a thrill seeker take a ride on Goliath, one of the tallest rollercoaster's at Six Flags. There's the southeastern flower show in February, Kobalt Tools 500 in March, Atlanta Braves from April thru October, film, video, renaissance festivals in April. , Jazz Festival in May, Atlantafest Christian music in June, National Black Arts Festival in July, Latino and Jewish festival in August, Yellow Daisy, Pep Boys Auto 500 in September, Scottish, Greek Festival in October, PowWow and Indian Festival in November and Festival of trees in December. When five O'Clock rolls around so do the parties. Atlanta is also known as Hotlanta. No matter your style you can be sure to find late night entertainment, there is always somewhere to go something to do in one of the many famous night clubs, Karaoke bars, Jazz lounges, restaurants or music joints spread thru out the city.

Things To Do in Atlanta This Weekend | February 20-23

If you are looking for

Are you a lover of billiards? One of the best bar games and sports, pool, is one of the best activities for a fun night out any day of the week. These bars in Atlanta have billia

Craving a health-conscious snack or meal? Check out these top juice bars in Atlanta blending up smoothies to perfection; they're great for anyone looking to keep their calories down and energy...

Hotel Bars in Atlanta Perfect for the New Year

Hotel bars in Atlanta are the perfect plan for a safe and wild night out, especially on New Year's Eve. Not only do you have the privilege of being a

Atlanta museums are as unique as the Southern culture that made the city. From history centers to art exhibits, museums in Atlanta are perfect for those looking

Thrifting in Atlanta is one of the best ways to get your holiday shopping done. You can get gifts as well as new clothes for yourself so you can both look good in 2020. Whatever time of the year,...

An arcade bar in Atlanta is an entertaining option any night of the week if you want to drink while playing some of your favorite games. From old school pin-ball to Super Smash B

Atlanta has one of the largest metropolitan areas in the southern U.S. and is a hub for dining, nightlife, entertainment, and unique annual events. There are so many attractions and

Need some comfort food after an all-night binger? Or have you been working all night, need food, and don't want to cook? Check out the best late-night restaurants in Atlanta perfect for any patron looking...

Ever get the feeling to drink with a view of your favorite city? Atlanta's skyline is no joke and these outdoor bars in Atlanta showcase the best view of the entire

Atlanta bars showcase a rich southern culture, especially it's musical diversity. With so many artists coming from the 404, live music in Atlanta is always eventful for whichever genre you prefer....

Whether you spell it barbeque, barbecue, or BBQ, it's one of the best ways to cook food out there, and rightfully so. Thereâs nothing tastier than marinated chicken, steak, or rubs steadily roasted to...

Who doesn't love a delicious beer? Nowadays you can get a beer that tastes like anything but a beer. Pilsner, pumpkin spice, sour watermelon; you name it, there are tons of unique beers out there for any...

From brunch to bar crawls, Christmas in Atlanta has fun in store just for you! Atlanta Christmas events are a splendid way to spend your holiday break

Christmas dinner is a sacred time of the year in which you want to cherish every moment with your friends and family. Those moments are definitely not all of the preparing or clean-up that goes with...

Bars and Clubs Open on Christmas in Atlanta

Christmas is a time to celebrate what makes you happy, and for most, peace of mind is happiness. If you want to be the best possible you this holiday season, visit one of the

Where to Buy Christmas Trees in Atlanta

Christmas in Atlanta is right around the corner and there's no better way of getting into the holiday spirit than by decorating the tree! Here are some suggestions on where

If you haven't made plans for New Year's Eve in Atlanta yet, you won't have to think much longer. These are the best hotels and events you will want to stay at and enjoy when r

Celebrate the New Year in fashion, with or without the kids! Check out some hot spots for fireworks for New Year's Eve in Atlanta! May the new year bring you the best

Thanksgiving in Atlanta is as American as it gets. All you need is the Macy's Thanksgiving Parade, mouthwatering turkey, and your loved ones. However you celebrate,

New Year's Eve in Atlanta isn't all about adult parties - kids like to party too! Ring in 2020 with fun family-friendly events in Atla

Bars Open on Thanksgiving in Atlanta

Want to change your tradition of staying in for Thanksgiving and party like a pilgrim? These bars in Atlanta are the perfect g

Best New Year's Eve Parties in Atlanta to Ring in 2020

HEY ATLANTA! Let's start off the New Year with a BANG! Ring in the New Year at your choice of Atlanta's popular New Year's Eve parties. As T.S. Eliot once said, "For

Restaurants Open on Thanksgiving in Atlanta

Halloween in Atlanta is always a spectacular scene but when it comes to fun events, which are geared towards families and kids? These kid-friendly Halloween events in Atlant

Halloween in Atlanta is always buzzing with fun things to do and particularly comes alive during October. From costume contests to candy festivals, these

An unequivocal musical prodigy, singer-saxophonist-songwriter-composer and band leader Grace Kelly has rocked the jazz world. The millennial artist has developed a new paradigm to exhibit her remarkable talent and unparalleled showmanship.

With recent Covid-19 updates, we've made the decision to transition this to a live rave event. Mask required, CDC Guidlines effective.

Learn to wrap Cars and become your own boss. Free wrap kit & 25ft of vinyl We will teach you all the techniques and gain more experience.

Featuring Blanco to Extra Añejo, tequila enthusiasts are invited to gather and embark on a unique tequila-tasting journey while enjoying unforgettable city views on TWO's expansive and dog-friendly patio on Thursday, March 25, 2021.